Just send an email and we will get back to you.

July 2017: New Site with Genealogy and Name Search
The new website has been created with a focus on providing a searchable genealogical database of hundreds of individual names.

Credits for much of the underlying data go to the Lucas-Riemens family website, Van Onselen family website, the Family Search website and Willie Lötz who provided all the Lötz family names and additional data on Bellingan names, as well as compiling the data into a Gedcom file.

To search for a name, go to the Name Search page.
There are over 1,300 individuals in the database, with around 450 surnames.

If you have any corrections to names/dates or have additional family names to add, please contact me.

When Wouter Noach Bellingan (1729-1798) sat down to transcribe the handwritten records from an old family bible, he notes that he is the son of Gerardus, the son of Florus, the son of Noach, the son of Florent Bellingan who fled from Amiens in Northern France to the Netherlands during the period of religious persecution of French Protestants (Huguenots).

The earliest relative mentioned, Florent Bellingan, was born in 1568 in Amiens, shortly after religious war broke out in 1562 between Catholics and Protestants in France following the death of Henry II in 1559. We don't know exactly when Florent fled from Amiens, but his only recorded child, Noach, was born in 1618 at Driel in the Netherlands.

I do not know where the bible is, but Dutch Regional Archives have a handwritten booklet, which I believe is Wouter Noach's original transcription, as well as a typed version of this. Thanks to the Lucas-Riemens family website in the Netherlands I was able to get a copy of that typed document which details so much of the early family history.

From the dilligent record keeping of these ancestors then, we can trace a path back to Amiens in the middle of the 16th Century, and we can piece together significant events in the lives of the Bellingan family who fled to the Netherlands from Northern France, and then after another two centuries, migrated to South Africa.

We have no information about the family before Amiens in 1568 and the earlier origins could lie in either England, Belgium, the Netherlands, Germany or France. 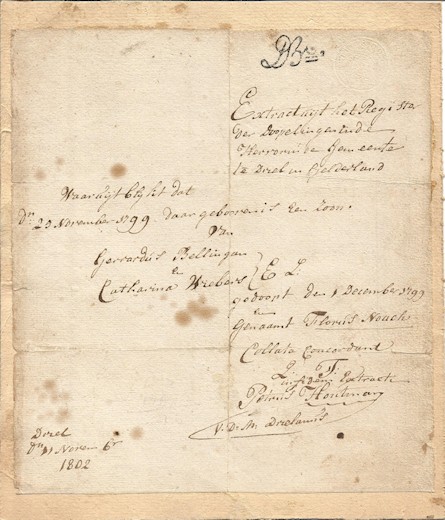 It is worth mentioning right from the start that throughout this site, mention is made of Driel, to be consistent with all the old documents. In fact during the Second World War the name was changed to Kerkdriel, to distinguish it from two other nearby villages, Velddriel and Hoenzadriel!

The image is of the extract from the baptism register, showing a birth dated 25 November 1799 with an embossed stamp dated 11 November 1802 to mark the date of the extract. The birth recorded on the certificate was of Floris Noach Bellingan in Driel, Gelderland, Netherlands.
(PDF version 1.3 MB:

We believe that Floris Noach travelled to South Africa with his parents, Gerardus Bellingan and mother Catharina (nee Wiebers) together with the Jansens & de Mist party, arriving in Cape Town on 23 December 1802.

Under the treaty of Amiens (25 March 1802), Britain, restored ownership of the Cape Colony to the Batavian Republic (the Netherlands, who had controlled the Cape from 1652-1795) and de Mist was to become Commissary-General, take control of the Colony from the British, and install the new Governor, General JW Janssens. (Britain re-occupied the Cape in 1806).

On 11 February 1826 Floris Noach married Maria Cornelia Marais, daughter of Daniël Petrus Marais and Dorothea Maria Terblans, at George, in the Cape Province. Their first child, Gerardus, was born in February the next year.

They had 16 children and those children in turn, had around 50 children of their own.

Lucas - Riemens family site, Strydom family site, Family Search Website
Also many thanks to Willie Lötz who provided much data, in particular on the Lötz family, and compilation of a Gedcom file containing the names.